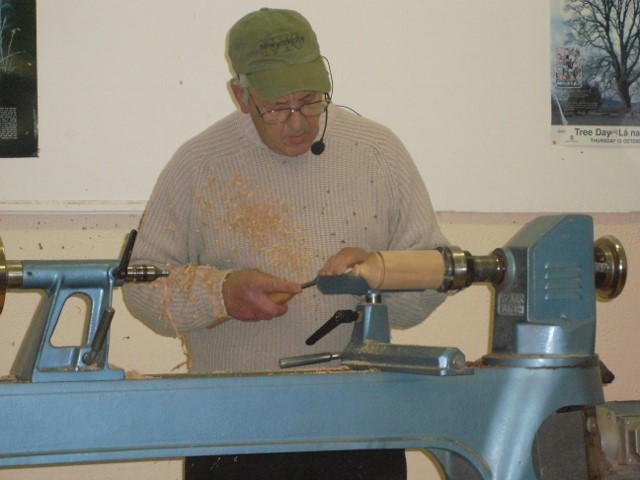 The November meeting of the 2015/2016 year and was held on Thurs. 12th November in the Craobh Eo Centre in Aghamore.

Our demonstrator for the evening was Paul Tant.

Pauls idea was to turn a number of bases of differing designs and tops e.g. like goblets that could be interchanged as required.

Paul then positioned a piece of spalted beech in the jaws. The base was then tapered which was trued up and he marked the length of the base with the parting tool. He finished by positioning a bead on the base and bored a hole to the size of the tenon already turned. The base was then parted.

With the remaining section of wood Paul started by boring the section first and then turned and shaped and finished by shaping the top of the goblet.

Paul then showed some examples of goblins made by whittling using tools he had ground out himself using jig saw blades.

Next on the agenda for Paul was to go through the process of turning the hat for the goblin. The centre was hollowed out and the outside was shaped close to the peak. To give the impression of the peak lying flat Paul positioned the piece in the chuck to turn off centre and the piece was finished using the homemade tools he had made.

Paul next showed us his idea for laminating veneers using waste pipe and jubilee clips and when glued how these veneers can be shaped using a tin snips to make petals for flowers for artistic work.

Well done Paul on an interesting demonstration that gave plenty food for thought.

These pieces will be presented to Enable Ireland at our Christmas dinner on Dec. 12th.

Further to this our annual seminar will be held on February 27th in the Gateway Hotel in Swinford.

Also the Vintage Raleigh bicycle which was made by members of the Craobh Eo chapter for the national seminar will be launched in Castlebar General Hospital. The coming weeks shall be very busy for our chapter members. 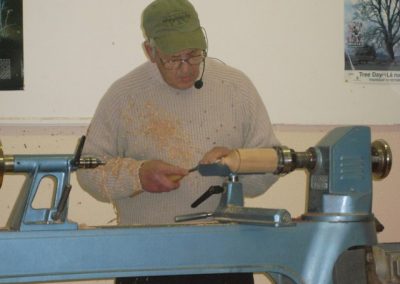 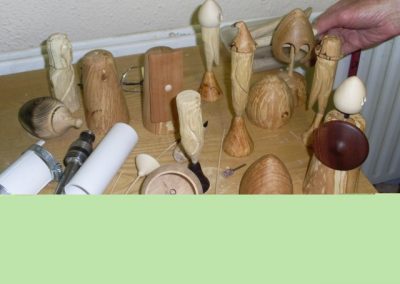 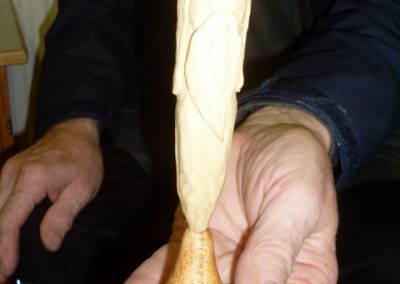 The November competition was an artistic piece. There was a good display, each with their own artistic impression.

The pieces were critiqued by Liam Horan and Pat O’Malley.

December’s competition will be a baby’s rattle. 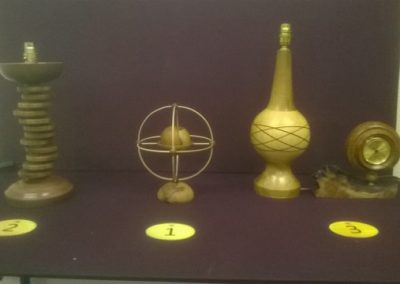