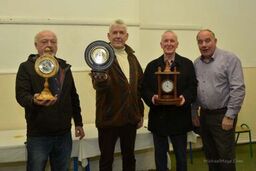 The October meeting of the 2018/19 Craobh Eo woodturning year was held on Thurs October 11th, 2018 in the Craobh Eo Centre in Aghamore.

Chairman Sean Foody opened the meeting with a review of the woodturning year gone by. He mentioned a number of issues that had to be dealt with like the CraobhEo building and having to relocate during the winter to St Gerald’s College during the bad weather. The Old Schoolhouse has now been renovated thanks to the great work of some of our members. The ongoing cost of running the building is still a high enough overhead on the Chapter. The annual seminar at the end of Feb 2018 was raised and issues that came up would have to be addressed going forward. An amount of money was raised when the cement mixer was displayed in a number of locations around the county. A big thank you to those who facilitated this. The money collected was donated to the Kidney Association.

Chapter Secretary Michael Horkan then gave his report. We now have 40 members and the average monthly meeting attendance is 28. We had a mix of local and external demonstrators during the year and this needs to be examined going forward as its getting more difficult to get demonstrators. The issue of communicating with members also needs to be looked at. Maybe a Whats App group could be setup. Our responsibilities with personal data also needs to be managed going forward.

PRO Willie Creighton highlighted the success in securing funding from Mayo Co. Co. and the disposal of the Chess Table and Cement Mixer which brought much need funds into the chapter.

Treasurer Martin Wilson circulated the financial statement and went through it in detail. The main items of note were the grant from Mayo Co. Co. as well as the aforementioned Chess Table and Cement Mixer proceeds. The CraobhEo seminar made a small profit as well.

All officers of the current committee indicated their intention to step down and were replaced as follows;

New Chairman Tom Jordan thanked the retiring members for their great work over a number of years and wished them well.

The National Seminar is taking place this weekend and the chapter are proud to be able to enter their Ferris Wheel for the Chapter Challenge.

The list of competitions for the coming year are;

The October competition was for a clock. The standard was very high, a big thanks to all who submitted a piece and well done.

Competition piece for November is a pedestal bowl. 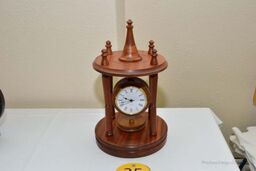 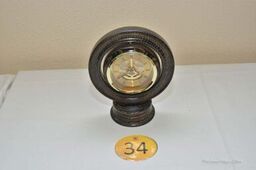 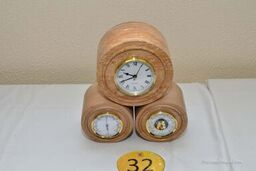 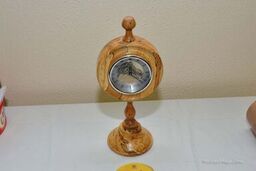