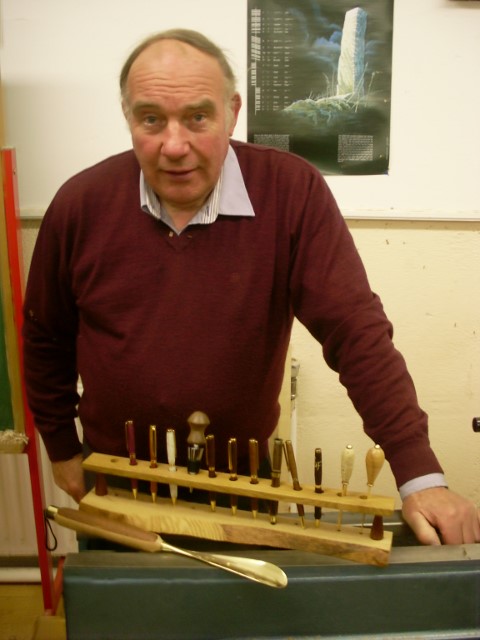 The May meeting of the 2015/2016 year was held on Thurs. 12th May in the Craobh Eo Centre (Old Schoolhouse) in Aghamore.

Sean Foody was our demonstrator for the evening and he demonstrated some very useful projects for all skill levels to try their hands at making. Sean is seen on left with a selection of his pens.

To start proceedings Sean went through the process of making a pen. He looked at varying materials for pen making followed by boring the material for the pen insert, applying the glue and setting the insert in position.

Next Sean mounted the pen on a mandrel and carefully went through the process of turning the pen down to your required design.

Getting a smooth finish is of high priority and the sanding process and application of finsh was given plenty of time to get the maximum effect.

He also went through the process of making a shoe horn and letter opener. These three projects are all made in a similar fashion with the designs down to personal choice.

Sean then proceeded to make a bottle stopper.

He first took a square section of wood and drilled a hole into it. Next Sean then took a threaded jig and counter bored. The required design was then turned and the bottle stopper was then threaded onto the wood.

The final project that Sean turned was the handle that could be used for a screwdriver. This handle was turned off-centre to increase the grip and to maximise torque similar to the old style Cabinet screwdrivers.

Sean started with a section of wood 50 x 50 180 long which he turned to a cylinder. One end was dovetailed to allow for a chuck. The piece was then tapered and a 12 mm spigot was turned to allow for a piece of copper to act as a ferrule. The drill chuck was then mounted on the tailstock and a 8mm hole was drilled.

The piece was then removed from the chuck and and pts at 120 deg were marked on the chuck end. A steb drive was then positioned at one of the three pts. To allow the piece to be rotated off centre. The piece is moved on the three points and turned accordingly.

Repositioning on the centre point allowed for the end to be rounded off.

This was a very good demonstration with lots of variety to suit all tastes and skill levels.

Well done Sean and thank you.

May’s competition was a piece from firewood (supplied). 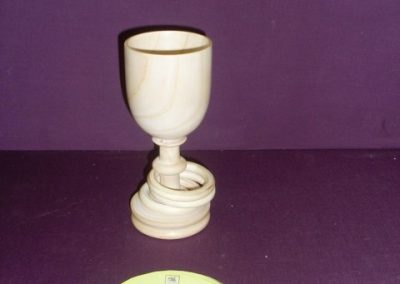